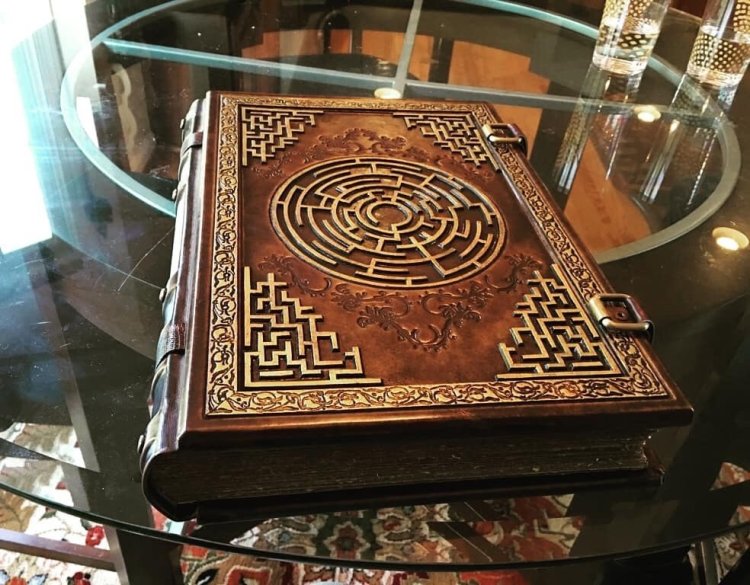 Michael loved mazes. So when he spied the book sitting on a table in his grandfather’s study, he just could not resist. He had been told never to touch the books in that study but he figured that was because old people tended to hide cash in their books, and he wouldn’t take any if he found it anyway. So there he was, standing beside the glass table examining the book.

This book had latches that were currently locked closed but Michael didn’t see any key hole to unlock them. That didn’t matter to him though, what had drawn him here was the intricate maze-like pattern on the cover.

Again his fingers traced over his chosen starting spot. One more time he thought to himself, certain he would see his error this time. His finger once more traced over his starting point and immediately the design started to glow. With a popping sound the latches were released causing Michael to draw his hand back quickly.

The book opened itself, the pages turning quickly. With the pages coming to rest at last, Michael peered at what now lay displayed. A photograph, well not quite a photograph, but a drawn image of great detail much like a photograph. In the image was Michael himself, standing over an open book on the glass table in his grandfather’s study. His grandfather, standing there behind him.

The detail was amazing! Even the design on Michael’s sweater was captured here in this image. Michael nearly jumped out of his skin when he felt the hand now on his shoulder, his grandfather’s hand. He hadn’t heard the man enter the study yet here he was.

His grandfather spoke, “I suppose it is time to share with you the secret to our family’s wealth. What you have before you now is our very own ‘Book of Seeing’ allowing us a glimpse into the near future anywhere in the world.”

I hope you enjoyed this story for Fandango’s Flash Fiction Challenge #37 (FFFC). Today’s entry is a bit longer than a normal flash fiction but breaking the rules sometimes is the right decision.

The image of the book by alexlibris999 at DeviantArt.com

Have a great day!

Family man, father, programmer, and artist. I work with digital art, photographs, author poems and fiction, and also work in artistic metal smithing. You can find poems, photos, and digital art samplings at https://mindescapes.net. Thank you for your support! If you like my offerings and would like to donate, please buy me a coffee:https://buymeacoffee.com/jimsponseller View more posts

6 thoughts on “The Secret to Wealth, A Fictional Tale”